An improper charging method or a charger can ruin the battery life and cause issues like overheating and overcharging. Currently, there are different types of procedures when it comes to charging your batteries. And you have to choose among these procedures as per your requirement, considering types of battery, voltage level, operation, etc.

When it comes to the Float Charger vs Trickle Charger, the trickle charge is a bit old-fashioned with its backdated technology as it keeps charging a battery, regardless the battery is compatible or not. On the other hand, the float charger is pretty advanced with its circuitry and all. So there is almost no risk when it comes to battery health.

What is Float Charging? 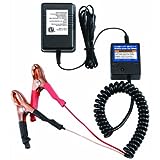 Right now, float charging, also known as maintainer, is one of the most common charging methods. And this type of charger charges your battery with the principle of maintaining float voltage. Here, float voltage means the minimum voltage which the charger applies to the battery even when the battery is fully charged.

The float voltage is much lower than the maximum charging voltage of your battery. This is how the float charger saves your battery from overcharging. However, with a float charger, the battery always remains in a charged condition.

Hence, the float charging method is used in emergency conditions or for backup power. In this particular charging method, the charger, load, and battery are all joined parallelly.

As float charger is used mostly for emergency backup purposes, you can see this type of charging in UPS, emergency lights and automotive batteries, and so on. 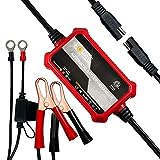 Moreover, in the float charging method, the battery gets disconnected from the source after the battery is fully charged. On the other hand, the trickle charger lacks this feature. So, there is a huge risk of overcharging with this particular charger.

However, the battery gets charged at its self-discharging rates in this method, unlike the floating charger.

There are many batteries out there that use trickle charging like Lead Acid Batteries, SLI Batteries, etc. Besides, you can see this particular charging method in portable electric devices like flashlights, electrical screwdrivers, and many electro-mechanical tools.

Also, just like float chargers, some automotive batteries use this method.

Will a Float Charger Charge a Dead Battery?

Well, it depends on the condition of the battery. To start the charging process by a float charger, the battery must have a minimum voltage, so that it recognizes that it is connected to a battery. If you are talking about a dead car battery, we will recommend using a true battery for most of the charging, then use a float charger.

How Long Can You Leave Your Battery With a Trickle Charger?

What Is the Difference Between Float Charging and Boost Charging in a Battery?

Float charger works with advanced circuitry and has got other features that care about the battery’s health. On the other hand, a trickle charger keeps charging your fully charged battery and might cause irrecoverable damage. Even though these two chargers have lots in common, in the battle of float charger vs trickle charger, a float charger is more preferable.