There is a very common misconception that a higher AH is always better and supplies more power. Although it is partially true, it is not exactly right under all conditions. So, we’ll walk you through the science behind a battery and figure out how or how not is a higher Ah battery better.

Is A Higher Ah Battery Better

In definition, the ampere-hour refers to the capacity of a battery. You can think of it like a gas tank where the larger the tank is, the more fuel it can hold. Similarly, with a higher AH rating, you’ll get a longer runtime without having to recharge the battery. 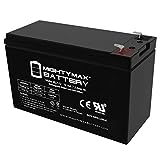 A battery is a combination of cells. Usually, there are 5 cells connected in series in a 2 AH battery and 2 parallelly connected rows of 5 cells in a 5 AH battery. Finally, the cells combine to supply power for the battery. Here, although the AH rating refers to the runtime, the number of cells affects the power supplied by it.

Now, each set of 5 cells have to supply only 10 amperes of current. Thus, it is easier for the 5 AH battery to keep the power level up. So, although a 4 AH battery should have exactly twice the runtime and power of a 2AH battery, in practical use, a 4 AH battery delivers slightly more than the theoretical approximation.

With the advancement of technology, life is impossible without electronic gadgets. And as each day goes by, we are getting closer to a world where wires don’t exist. Even today, most gadgets are largely dependent on batteries for power. This is where weight and size comparison comes in.

As a higher AH requires more cells, it becomes heavier and requires more space. Although you get better performance, you need to make sure your tool can fit the battery you are getting.

Does A Car Battery Replacement Have To Be The Same AH

According to most experts, as long as the voltage is similar or somewhat near, a higher Ah should be fine for a car battery replacement. AH rating just determines the time your battery will last without recharging. So, if your alternator can support the replacement AH, it’s fine to go higher than the existing one.

However, a much higher Ah rating is most likely to cause slow charging and load on your alternator. So, staying closer to the previous AH rating is crucial as well. Also, higher AH batteries tend to be larger and heavier so they should be able to fit your car as well.

Ans: Yes, you can use a 4AH battery but you need to make sure your device can fit the larger battery.

Ans: A 4 AH lasts approximately 35 to 45 minutes on one charge. Although this depends on the requirement of the device as well. You may have a look at the complete cordless tools battery guide.