A lithium-ion (Li-ion) battery is a high-tech battery technology that utilizes lithium as its chemical compound or electrolyte. It gets its name from this core material (Lithium). In recent years, lithium batteries have become increasingly popular. If you observe carefully you will find them in every electrical component, including smartwatches, wireless headphones, smartphones, laptops, and even in your cars.

If you do a little research, you’ll discover that there are a variety of lithium-ion batteries available on the market. Different lithium batteries contain different features including power providing rate, energy, safety system, life duration, price, and efficiency. 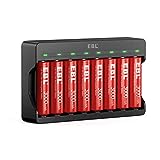 Though you can classify them based on their size and forms, their main difference is in their materials.

Lithium-Ion Battery Depending On Chemical Material

There are four varieties of lithium batteries available, depending on the chemical component.

Lithium Cobalt Oxide Battery is also known as LiCoO2 battery. Lithium carbonate and cobalt oxide are used as the electrolyte in this battery where carbon works as the anode and cobalt oxide as the cathode. When you use an electronic gadget, such as a smartphone, lithium ions travel from the anode to the cathode, generating energy to power the device.

LiCoO2 batteries are well-known across the world for their high energy density and safety mechanism. As a result, this sort of battery is found in a wide range of consumer electronic devices, like smartphones, smartwatches, laptops, and cameras.

As lithium-ion manganese oxide batteries are famous for their high voltage and high flow of current you can use them in a variety of power tools, for example, air compressors, grinding machines, hair trimmers, jackhammers, lawnmowers, and even in motorcycles.

This battery is known as a lithium-ion ternary battery among users all over the world. Nickel is used as the chemical component or electrolyte in this battery. We know that nickel is a very toxic material. Nickel is a poisonous metal, so lithium-ion nickel batteries are rarely used in our daily lives as consumer products.

Instead of being used in consumer products, they are usually used in the automobile sector such as on motorcycles, electric cars, and trucks.

Lithium iron phosphate or LiFePO4 batteries use phosphate as their cathode material. The internal resistance of this battery is low, and the current capacity is high. Because of the low resistance property this battery is capable of providing a high current rating, and good thermal stability. It also provides a long life cycle.

These batteries are frequently used within electric bikes and other products that need a long lifetime.

Lithium-Ion Battery Depending On Size

At this time, there are only two types of lithium-ion batteries available depending on their structures.

This battery has a cylindrical shape. The anode and cathode remain on opposite sides of the cylindrical tube. This is one of the most used lithium-ion batteries, especially used in Japan and South Korea-based electric devices.

The rectangular lithium-ion battery is generally known as an aluminum or steel shell battery. The structure of this battery is fairly simple. Its body is made of strong stainless steel, and it has inbuilt sensors and an explosion-proof safety mechanism.

In recent years, rectangular batteries have mostly been used as a power source for smartphones and electric cars.

Q: Which Is the Best Lithium-Ion Battery?

Answer: The best lithium-ion battery of all time is a lithium cobalt oxide battery (LiCoO2). They are well known for their high energy density and automatic safety mechanism system.

Q: Is It True That All Types of Lithium-Ion Batteries Are the Same?

Answer: No it’s not true. Though all lithium batteries use lithium as their electrolyte they are not the same. They have different variations of anodes, cathodes, storage arrangements, and chemical components.

Not to mention, the second feature brings a revolution in almost every sector of technology. As a result, several types of lithium-ion batteries are produced on a large scale to meet market demand.