2ah or 4ah batteries have revolutionized the industrial sector in recent years. These batteries are famous worldwide for being the power source of cordless tools like circular saws, jigsaws, drills, hammer drills, sanders, grinders, routers, and many others. These types of tools are very easy to use and save time and effort not only for professionals but also regular people use them in their daily lives.

However, this 2AH or 4AH battery will not be able to power your tool for an extended period. You have to change your battery after several uses. When it comes to replacing the battery, it’s not uncommon to be confused whether a 2AH or 4AH battery will work best for you. In this post, we examine the 2Ah vs 4Ah battery and explore which is better for your cordless power tool.

What Is A 2AH Battery

Ah is the abbreviation for ampere-hour or amp-hour. This is the maximum charge that a battery can produce in an hour.

A 2Ah battery is a battery pack that can deliver 18 volts (V) or up to 20 volts (V). Each 2AH battery pack contains five cells that are connected in series and each cell produces 3.6V. As the cells are connected in series they combine their voltage, but not their amp hour rating. The manufacturer combines two packs of five cells in parallel to power up large tools such as lawn rollers and vacuum cleaners.

How Long Does A 2AH Last

The term “Ampere Hour” describes how long your battery will survive. This shows you the number of hours you can power up your cordless tools using your battery. Generally, a 2AH battery lasts roughly 6-8 hours on average. This means that each ah will last approximately 3-4 hours.

Using the following method, you can quickly calculate how long your battery will survive after being fully charged: For example, If you have a cordless tool that requires a 2ah 18 volt battery with 150 watts of power, the run time of your tools will be 0.8 hours. 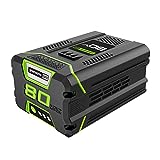 What Is A 4AH Battery

A 4Ah battery is a battery that will provide you with 4 amps of current for an hour before it needs to be recharged. A 4Ah battery can deliver 24 volts (V) or a maximum of up to 48 volts (V) on a single charge. Every 4AH battery pack consists of four cells that are connected in series. Each cell of the battery pack produces 6V.

To power up, heavy instruments like the Hammer Drill, Rotary Hammer, and Impact Wrench, two battery packs or eight cells are connected in parallel. This type of combined battery pack can generate up to 48 volts.

How Long Does A 4AH Battery Last

The factory standard hourly rate of a 4Ah battery is 20 hours. Generally, a fresh new 4Ah battery will typically provide you a 0.2 amp power for 20 hours. However, several recharge and discharge cycles will shorten that time in half.

By using this formula “Battery Operational Time = (Battery Capacity * Voltage) / Power” you can also predict the lifespan of your 4AH battery.

There are several uses for a 4AH battery. You can use a 4Ah battery on many devices. They are commonly used to power up powerful wireless power tools such as a Jigsaw, a Biscuit Joiner Shop Vacuum, an Orbital Sander, an Air Compressor, and many other devices.

Differences Between 2Ah Vs 4Ah Batteries

A 4Ah battery offers greater capacity than a 2Ah cell to store more energy for your power tools. Generally, a 4Ah battery lasts twice as long as a 2Ah battery.

The weight of the battery should be an important consideration when purchasing a battery. If you use a heavy-weight battery in your power tool, the weight of the equipment will naturally increase which may reduce your productivity and comfort. Generally, 4AH batteries are heavier than 2AH batteries.

Sizes of the Battery

Some battery manufacturers make 4Ah batteries that are the same physical size as 2Ah batteries.

Comparison At A Glance

Q: What is the average lifespan of a 2Ah battery?

Answer: Average lifespan of a 2Ah battery is 6 to 8 hours.

Q: Is it possible to use a 4Ah battery instead of a 2Ah battery?

Answer: Of course. Rather than a 2Ah battery, you can use a 4Ah battery. However, if you plan to do so, make sure the replacement 4AH battery has the same voltage as the original 2AH battery.

Q: Is a 4Ah battery more powerful than a 2Ah battery?

Answer: The main difference between 4ah and 2ah batteries is the run time. The run time of a 4Ah battery is roughly double that of a 2Ah battery.

2AH vs. 4AH batteries both work in the same way; the main difference is in run time. If you only use your power tool for personal purposes, I recommend purchasing a 2AH battery. That will serve your needs. But if your cordless power tools need to run for a long time you should invest in a 4Ah battery; otherwise, expect disappointment.