Despite having some similarities, Li-ion and NiCd batteries differ in some respects. And the click says that you want to know the differences in detail. That’s great!

You might be a new or an experienced person in the energy industry, your needs may be small or big we don’t know. Whatever it is, this post will please you for sure. It comprises the best contrast including the latest information to feed your head.

NiCad (Nickel Cadmium) batteries ruled over the market for years. However, in recent years, they are getting challenged by newer Lithium-Ion batteries. Why? Well, we cannot tell you that in brief. It indeed requires a vivid discussion.

To make the discussion or contrast evident, here, we shall dwell on various respects i.e. their history, electrochemistry, manufacturing cost, environmental impact, applications, and so on. Let’s get them downright!

Let us start with the general concept. NiCd batteries are also known as Nickel-cadmium, NiCad, or Ni-Cd batteries. 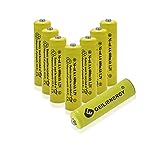 It is one kind of rechargeable battery. Then what does it comprise as electrodes? Well, it comprises nickel oxide hydroxide and metallic cadmium as electrodes. You will see a wide range of sizes and capacities of this type of battery.

On the other side, lithium-ion batteries are rechargeable. It features metallic lithium as an anode and high charge density. These batteries are also called lithium-metal batteries. Usually, its positive electrode is a metal oxide, and the negative one is made from carbon.

Swedish scientist Waldemar Jungner is the inventor of the NiCd or nicad battery. It was 1899. Its production started in 1946 in the United States of America.

And the foundation of lithium was built in the 1970s by British chemist M. Stanley Whittingham. Then after getting developed by the Japanese chemist Akira Yoshino in 1985, we saw the first commercial lithium-ion battery in 1991.

And as an electrolyte, it uses aqueous potassium hydroxide.

Interestingly, these ions walk from the negative side to the positive side at the time of discharge and get back while charging. Instead of metallic lithium as the electrode material, these batteries use an intercalated lithium compound.

The manufacturing cost of a lithium-ion battery is approximately 40 percent more than that of a nicad battery. The lithium ion batteries require additional protection to monitor the voltage and current.

Li-ion battery is smaller, more portable than nicad battery because of being lighter. You will have different sizes and shapes in 4 sorts of formats. These are as follows!

On the contrary, there are two kinds of Nicad batteries:

You will have these batteries available from AAA to D. Apart from the single cells, you will get up to 300 cells out there in the market. These batteries are a fabulous fit for automotive and heavy-duty industrial usage. And the cell number is below 18 for portable applications.

Per cell, the nominal voltage of the lithium-ion batteries is 3.7. However, a battery pack can contain any voltage possible in 3.7-volt steps by using the cells in series.

On the contrary, the nominal voltage of the NiCd cells is 1.2. Compared to alkaline and zinc-carbon primary cells, it is lower than 1.5V. And that’s the reason you won’t find them as a replacement for them in all usage.

Anyway, in this criteria, lithium batteries are better than NiCd batteries.

Generally, a li ion battery lasts around two years, and then it will be no more. It is approximately equal to 1,200 cycles. However, it has an excellent quality. It won’t fail to perform during its entire lifetime!

And usually, the shelf life for nickel-cadmium batteries is three years. It can carry up to 2,000 charges and discharge cycles. Evidently, it shall serve you more than a lithium-ion battery.

You will see a “memory effect” issue with NiCd batteries when you discharge and recharge them to the same state several times. But no worries, it doesn’t affect the battery capacity alarmingly. Some devices can, and some devices cannot endure the period of decreased voltage.

Besides, repeated overcharging causes a ”voltage depression” or ”lazy battery effect”. In such a situation, a NiCd battery pretends to be fully charged and gets discharged shortly. Even if the battery keeps its half capacity, it can sustain for 1000 plus cycles.

In addition to that, reverse charging would be a problem. It is also liable for reducing longevity. Also, it causes hydrogen gas that could be a danger. Else, NiCad batteries beget dendrites when they lack regular use. These get into the separator membrane between electrodes and result in internal short circuits and premature failure.

On the contrary, you require minimum maintenance for lithium-ion batteries. Devoid of creating a “memory effect,” they can be recharged. They can operate in a wider temperature range too! When we compare, we see its self-discharge is less than half. And thus, it becomes a good fit for modern fuel gauge applications.

However, li ion batteries are fragile. They need a special protection circuit for the sake of safe operation. These are the cons of this battery, no doubt. Additionally, such a circuit minimizes the peak voltage of every cell while charging. Also, it bars the cell voltage from dropping too low on discharge. It compels you to monitor the cell temperature to resist temperature issues.

NiCad battery– you can either use it individually or as a battery pack. You can use its cells in different needs such as –

Apart from these, you can use this battery in remote-controlled electric model airplanes, boats, cars, cordless power tools, and so on. That means the NiCd battery is an apt choice where you require a high surge power, plus a comparatively low internal resistance. Moreover, you can employ its bigger flooded cells in some crucial usage such as –

The Li-ion batteries are the ‘most prolific battery technology’ of today. It is going to dominate the upcoming days too. You can apply this battery for different necessary needs such as –

Likewise, you can use these batteries for your devices like cigars or pipes. No matter the amount of application, you may feel free as it has zero memory effect and a slow loss of charge while out of service. And that’s why it became widely popular for consumer electronics. At the same time, there is a growing demand for this battery in –

Let us mention the cost per battery. This would be an average notion. Generally, li-on batteries cost more than NiCd batteries. Where a NiCd battery is $50, the li-ion battery is $100. And when the NiCd’s cost per KWh is $7, the Li ion’s is around $25.

No worries about the lithium battery waste! It is non-hazardous and therefore eco-friendly. On the contrary, NiCad batteries generally have cadmium between 6% to 18%. As a result, they leave a heavy toxic metal. Experts have to give special effort during battery disposal.

All the brands are not reliable. Moreover, they shine or fall behind over time. Since we have been in the power and energy market for years, it’s our duty to suggest to you the best brands. Here we go for the best NiCd battery brands for 2021 below!

And the most notable brands for lithium-ion batteries for 2021 are as follows!

Now you know the differences between NiCd batteries and Lithium-ion in terms of their history, electrochemistry, manufacturing cost, environmental impact, applications, shelf life, operation, and performance, voltage, size, and types, price, running time as well as popular brands. Hopefully, you have secured a robust notion by now. And yes, this post will benefit you in the long run.