A wireless network adapter is a hardware device that enables a computer to connect to the network wirelessly. Of course, you can always connect your pc with an Ethernet cable to the router.

You can access the network that way but it can become a hassle to set up. Especially if the router is far from the computer then you will need a longer cable which can become messy and ruin the look of the room.

The Necessity for a Wireless Network Adapter

Now all you need is a USB network adapter to access the network. The USB has become a standard for adding accessories to the computer. Almost anything can be added to the computer with a USB.

Do I Need a Network Adapter?

So we can see it is a very useful device to have in modern days. But that doesn’t mean you should go and buy it right now. Most modern computers have a wireless receiver built-in with the motherboard. So you don’t need to buy an extra wireless adapter.

When purchasing a new computer or building one by yourself, make sure to check if the motherboard has built-in Wi-Fi. If it comes with WiFi, then you don’t have to buy an additional wireless adapter.

If your computer doesn’t have a wifi receiver then it is a good idea to buy a wireless network adapter. However, even if your motherboard doesn’t come with an integrated wireless adapter, this is probably not the best solution.

When building a computer, choosing a WiFi card over a USB adapter is a better option. It is because they have better range and often work with both 2.4GHz and 5GHz networks, whereas most adapters support only 2.4GHz networks unless it is a high-quality one.

There are a few types of wifi adapter cards that are available in the market. But for simplicity, we are going to divide them into 2 categories. These are the PCI cards which include different types of PCI (PCI, PCIe, and Mini PCI) cards and USB cards. 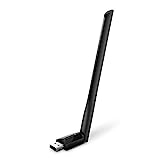 The PCI cards are the ones that are fitted to the motherboard. If your older computer doesn’t have a wifi card but has a PCI slot, then you can install a PCI adapter on the slot.

The upgraded version of the PCI slot is the PCIe or PCI Express. These slots can install pretty much anything from sound card to GPU and wireless adapter. There are some variations in the PCIe slots so make sure you check if the slot supports the card or not.

Some PCI cards come with an antenna that sticks out from the computer for a better range. These PCI cards are mostly used inside all the computers these days and they do a pretty good job at connecting you to the network.

The USB adapter is relatively easier to install and use than the PCI ones. These wireless adapters can also come with or without the antenna. You need to have some knowledge about PCI slots to match the supported version of PCI cards. But you don’t need to know much to install a USB adapter.

If you are using the latest version of windows then just plugging the USB adapter into the USB port is enough. Then you can connect it to your router via the wifi and enjoy the internet.

But it does take up a USB slot on the computer. And if you are using multiple different USB-related items like an external HDD, Mouse, or keyboard, you can find yourself running into a problem to free up a USB port for your other device.

Also, if you are using windows 7 or any lower versions, you need to manually install the drivers to make your USB wireless network adapter work. These versions of Windows don’t come with a driver. You can usually find the driver software inside the disk that is provided with the adapter.

The wireless network adapter for Xbox 360 does exactly what any USB adapter will do for the PC. It enables the Xbox to connect to the internet and Xbox Live.

Later version like the Xbox 360 S doesn’t need an adapter but the original Xbox 360 doesn’t have built-in wifi. So you need to use the Xbox 360 wireless adapter to connect to the network.

Another thing you have to keep in mind is Xbox doesn’t support any other wireless adapter driver. So you cannot use any other USB adapter with it. You need to have the specific one that supports your Xbox 360.

Ans: You can find it inside the “device manager”-> “Network Adapters”. To access the device manager just press the start button and type it on the search bar.

Ans: If your pc doesn’t have built-in wifi and you need to use the network then you will need a wireless adapter. Other than that you don’t need it.

A wireless network adapter is becoming more and more necessary as we keep relying on the internet more and more. Almost all the devices from computers to camera and cell phones add a wireless adapter inside them to help them keep connected to the network.