There are many batteries in the market. With the development in battery technology, manufacturers have also adopted the latest technology. And depending on their service and longevity, we use a brand or another.

Motorcraft is known for its long-lasting and power heavy features. But not all of the batteries are the same,

Here we have gathered a few of the best. Check out the Motorcraft Battery Review and choose your next battery. 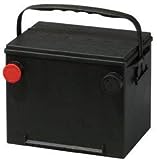 Best Motorcraft Batteries in the Market

These are the best Motorcraft batteries we have come with.

Motorcraft battery is known for their performance and longevity. They come in different types. This one in particular is a Flooded cell battery.

It has a Cranking amp of 735 and a Cold Cranking Amp of 590. Which is quite good for an automotive battery. It can be used as a starter battery as it has a Reserve Capacity of 84 minutes.

Batteries that have a higher reserve capacity can be used as a trolling battery or an auxiliary battery. It can handle electrical accessories better than a starter battery with low reserve capacity.

A starter battery has a low reserve capacity but high cranking amp so it can start the battery at any given weather condition. So this battery is a great starter battery. But for auxiliary, it might not come on handy.

It is in the BCI group 95R. Check if your car fits a 95R size battery or not before buying.

This battery from Motorcraft is a good one. It can be both used as a starter and an auxiliary battery.

As it comes with a CA of 875 Amps and CCA of 700 Amps, you know you can depend on it. Whether you are in a hot climate region or a cold freezing one, you can definitely go for this one. It will outrun any other battery in the market.

It has an impressive RC of 100 minutes. With this rate, it can provide enough power to run minimal electrical components.

So if you are not heavy on electrical components, go for this battery. It belongs to the BCI group 75. Check your car before buying the battery. If it fits a group 75 battery, then go for it.

An impressive performance battery would be the MOTORCRAFT BATTERY FLA BXT65850. This battery packs a great deal of power under its hood.

With a Cranking Amp of 7060 and a Cold Cranking Amp of 850, it can light up even an RV or two. It is a powerhouse for all the heavy accessories you need for your vehicle.

Thinking of going on camping? This battery has a Reserve Capacity of staggering 150 minutes. Which is more than enough for keeping your accessories running before you turn on the engine.

It belongs to the BCI group 65. If you are looking for a battery and a group 65 battery that fits your vehicle, I would suggest going for this one. As Motorcraft batteries are known for their long-lasting qualities and tremendous performance, this would keep you up and about for a very long time.

Another good battery from Motorcraft to look out for is the MOTORCRAFT AGM 12V 48 H6. This battery has an AGM build, meaning it is maintenance-free. And AGM batteries last longer than flooded batteries. As it is from Motorcraft, it will last twice as long.

The battery has a CA of 950 Amps and a CCA of 760 Amps. Which is what we need from a battery. It can be used in both climates and in any condition. As it has an AGM build, you can mount it probably in any way possible.

The RC of this battery is 120, which is good for a car with moderate electrical accessories. It won’t ditch you in the middle of the road or trip, that’s for sure.

It belongs to the BCI group 48. So check your car’s battery requirements before buying if it will fit or not.

What is the warranty for Motorcraft batteries?

Who is the owner of Motorcraft parts?

What kind of batteries does a Motorcraft have?

Motorcraft has both Flooded Cell and AGM batteries.

The better the battery, the better your car will perform. Always remember to calculate how much electrical power your car needs. After that, you can buy a battery. If you live in a cold region, choose a CCA-heavy battery. And if you live in a hot or tropical one, a low CCA battery will suffice. But always go for a better-reviewed battery than an unknown one.