Solar panel inverter is a part of the solar panel system that actually plays the key role by converting the power produced from the panels from Direct Current(DC) to Alternative Current(AC). However, there are different types available in the market that provides special features.

Thus learning about these types of solar panel inverters will give you a clear idea to decide which inverter is best for you.

What is a Solar Inverter

An inverter is an electrical device that is used to convert Direct Current (DC) received from the power source to Alternative Current (AC). In the case of a solar panel inverter, The inverter catches the DC current from the solar panel and converts the current into AC for domestic appliances and industrial works.

It is one of the most important elements in the solar power system as it determines the amount of energy to be sent to the home appliances. However,  there are different types of solar panel inverters that have different features and applications for better performance.

How does a Solar Panel Inverter Work

Now let’s have a brief idea about the working procedures of the solar inverter.

Generally, when the sun rays fall on the solar panel plates of our home or industries, the electrons of the panel start to move, which produces DC electricity primarily. Next, the panel sends the current directly to the inverter to convert the current into an Alternative current (AC). 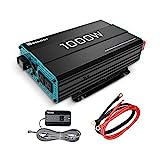 Here the electricity changes its direction rapidly; this flow is applicable for the usage in household appliances as well as industries. Thus the solar inverter plays a vital role in the solar electricity system.

There are different types of solar panel inverters depending on the size of the system in your property, the amount of power it produces from the solar panel as well as the amount of electricity you are using. The efficiency of the inverter highly depends on the cost, however, an inverter with the minimum price range will supply you with up to 90% and can operate for around 12 years.

Typically, you will find five types of inverter in the market. These are

Each of these inverters has different features, functionalities, pros, and cons as well. It is wise to learn about them so that you can make a better choice for your property.

The most common and ancient type of solar inverter is the string inverter. Generally, the solar panels are placed serially in an open place and each string is connected with each panel. And all the strings are connected to the string inverter that changes the DC electricity into usable Alternating Current AC.

This inverter is designed in a way that is installed with every solar panel underneath it to make the panels produce at a peak rate. This system provides the panel to work at a high-efficiency level and its performance does not get lowered due to any neighbor panels shading problem.

This inverter is getting popular day by day among household users for its better productivity, though the installation cost is higher than String inverters.

Moreover, a microinverter also allows the user to monitor the performance of each panel as well as find out the flaws of any panel. Overall performance does not get sacrificed due to the repairing of any single panel and the power increment process is very simple; just add more solar panels along with microinverters instead of changing the central converter in a string inverter.

Power optimizers have some similarities with the microinverter such as can be installed underneath each solar panel, and efficiency in power production etc made this type of inverter also demandable in the market.

The price rate is also less than the microinverter and allows monitoring of the performance of each panel using an online portal.

But the key difference is power optimizers are not capable of converting the DC current to AC current from every single panel source. The produced DC current is sent to a string inverter connected to it and then the current becomes AC by the string converter.

Using the fundamentals of a Hybrid solar panel PV system, hybrid inverters are specially featured for storing power in order to utilize them later. There remains two option; whether to send back the excessive energy to the power grid or you can store the energy in a battery.

This inverter is the best option for you if you want to store the energy for further usage. It requires a solar storage battery for saving and using the energy next time.

2. Expensive to buy batteries and installation.

After that,  the box connects with the inverter with a single string. Here the duty of the inverter starts converting the current from DC to AC. Finally distributes the current to circuits and other appliances of the property.

During bad weather conditions, when the panels do not get proper sunlight, normal inverters can not supply power efficiently. Battery-based inverters can do the job done Here this inverter is called a Bi-directional inverter as it is designed to work like a battery as well as a solar inverter. Depending on the UL design, the inverter can be off-grid, grid-tied or grid-interactive

The generator works to charge the battery by converting AC electricity, on the other hand, the inverter keeps the supply on by providing AC power from DC. This inverter can maintain power

between the array and the grid simultaneously.

Generally, a house needs 230kWh of electricity in a month. To cover this amount of power supply, approximately 7 solar panels each of 330 watts are needed to install.

Primarily there are 3 types of solar panels used vastly.

It depends on which type of inverter you are installing in your house. A single microinverter costs around $200 initially.

The solar panel industry is growing its popularity among households owners and other business infrastructures. So, before planning to install a solar panel on your property, it is obvious to know about the inverter that is a key element in the whole system. If you get any questions left unanswered in this regard, don’t feel shy to come up with that in the comment section.