If you own a camera, you’re undoubtedly familiar with the cr2 and cr123 batteries. The two types of batteries are well known among users for their easy and reliable use.

Even so, I won’t be surprised if you are confused while purchasing a cr2 or cr123 battery since they are plentiful in the market. As a result, I thoroughly researched the cr2 battery Vs cr123 battery and give you all the information you need. Let’s get started!

What is a CR2 Battery?

If you research the market, you will discover that there are approximately ten different varieties of cr2 batteries available. This large number of cr2 battery types proves that they are highly popular all around the globe and have a wide range of applications.

CR2 batteries have a set of technical specifications that you can use to determine whether the battery is compatible with your device or not. Before purchasing a battery for your electric gadget, you should carefully check them. Otherwise, it may suffer you.

A cr2 battery has a nominal voltage of 3v (volts) and a cutoff voltage of 2v (volts) which is perfect for your gadgets like a camera or backup power source. It has a charging capacity of about 800 mAh.

The cr2 battery’s operating temperature range is about 40°C to 60°C. If you use a cr2 battery above this temperature, the battery’s life will be shortened, and it may even explode.

Generally, the quality of the production and the range of application of your cr2 battery will determine how long it will last. If your battery is fresh, brand new, and purchased from a reliable source it will last over a year with the appropriate conditions.

However, if you use your battery extensively and it demands a lot of energy, such as for a high-lumen floodlight, your cr2 battery may only last a month.

Nowadays cr2 battery technology is very popular and widely utilized in several areas, including the civilian, military, medical, and industrial sectors, all over the world. 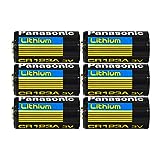 In the military industry, the cr2 battery is applied in guns, lighting and optics,  vehicles, laser devices, and in many networking and communications equipment. CR2 batteries are also utilized in a variety of civilian items, including cameras, flashlights, LED lights, laptops, gaming consoles, electric automobiles, and so on. Alarm batteries and power for different surgical and health devices are examples of medical uses for the cr2 battery.

CR123 battery commonly known as 123 battery is a high-power lithium-based battery. Generally, they use Lithium Manganese Dioxide (Li/MnO2 ) as their electrolytes. For using this type of chemical property, a cr123 battery is extremely safe to use.

They are specially designed for compact devices that require a lot of power, like high-powered LED lamps and digital cameras.

The technical characteristics for cr123 batteries are shown below, which you should review before purchasing.

The nominal voltage of a CR123 battery is 3V volts with a cutoff voltage of 2V (volts). CR123 batteries have a higher capacity than cr2 batteries, ranging from 700 to 1700mAh.

The optimal working temperature range for cr123A lithium-based batteries is -40° to + 70°C or (-40° to 158°F). If you use this battery at this temperature, its self-discharge rate will be the lowest possible, giving you a better user experience.

The lifespan of a battery entirely depends on its application, maintenance, and build quality. If you use your battery decently a cr123 battery may live up to three years, which is longer than a cr2 battery.

In some respects, cr2 and cr123 batteries are quite similar, but they also have certain differences.

Answer: No, they are not the same battery kind. The size of a cr123 battery is larger than that of a cr2.

Q: Can I recharge a fully discharged cr2 or cr123 battery?

Answer: No, you can’t recharge a cr2 or cr123 battery because they don’t have the ability to recharge their cell after they’ve been totally drained.

Q: What are the CR2 battery equivalent batteries?

If you are thinking of replacing the batteries in your camera or other electronic devices, cr2 or cr123 will be the best options because they are dependable and provide you with high voltage and a long life span.

I hope this post provides all of the information you need on cr2 versus cr123 batteries.